The Galileo release of Eclipse is in its final days. The eclipse SDK itself is effectively done and the current build is under consideration to be the final release.

Say I have a feature that I build, it runs on top of the Eclipse Platform. I know Eclipse Galileo is coming out soon, so I download it and try it out with my feature.

Oh No! It doesn't work! I've found a bug in the platform, and its a major blocker for me. (Oops, maybe I should have tried this a couple of months ago when there still would have been time to fix the bug.)

Meta-Comment: The Eclipse Platform Project has a reputation for shipping on time (even if that means there are unresolved bugs). There is a strict end game plan that is followed for the release, lock down started back at the beginning of May. The further we are along in the plan, the harder it is to get a fix approved for release. A lot of people don't seem to relealize this happens, and perhaps wonder why their important bugs are defered with the comment "Its too late".

Ok, I need to patch the platform. How do I do this?

To work through the steps of patching the platform, I created my own example feature:

For the purposes of the example, I'm starting from the Eclipse Platform Runtime 3.5RC4. Because I want to strictly control the upgrade path in the example, I removed the Galileo and Eclipse Project repositories from the available sites (Window -> Preferences -> Install/Update->Available Software Sites).

Unzip the platform, and installed the feature from the exported repository. I didn't create any categories for the feature, so "Group items by category" must be unchecked. 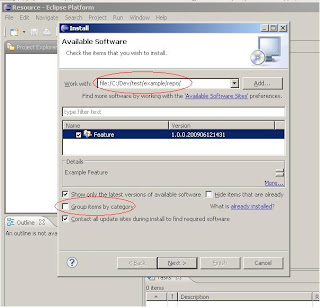 Say we have a fix with touchpoint.eclipse version 1.0.101.v20090611. (When following the eclipse versioning guidelines, the maintenance version of this bundle should be 1.0.101 and the version for the next year's release will probably be 1.0.200).

We can easily create a new Feature Patch with the wizard: 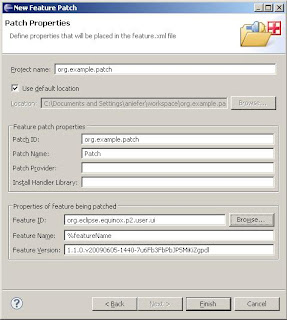 We specify the version of p2.user.ui that we are patching (here the one shipped in 3.5RC4). In the feature patch, include org.eclipse.equinox.p2.touchpoint.eclipse with the specific version containing the fix. Then, add the feature patch as an inclusion in our org.example.feature:


If we have the bundle containing the fix in our target platform, we can now export a new version of our example feature that includes it. And we can update the platform where our feature is installed to get the new version that brings the patch with it.

The metadata for the Patch installable unit looks like this:

p2 is much more flexible about patches than the old Update manager was, so there are a few different ways to address this, and I will write another post covering this soon.