In my last post I showed how to create a simple feature patch. However, this patch leaves us in a state where we can no longer upgrade the platform because the patch itself requires a specific version of the feature it is patching.

If we make the inclusion of the patch in our org.example.feature optional, then we no longer block upgrading the platform underneath us. 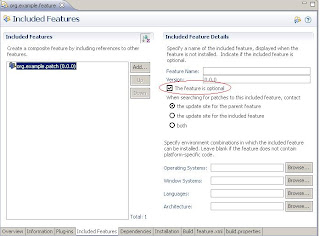 This is fine if the new version of the platform includes the fix we want. But what if it doesn't? What if we need to have our patch apply to several different versions of the platform?

Unfortunately, currently the only way to do the following is to edit the metadata by hand. (Paul Webster uses XSLT transforms, I have also raised a bug to allow changing things using the p2.inf file.)

Looking at the metadata for the patch, we see a few interesting sections:

The scope section of the patch's metadata specifies which feature(s) the patch applies to:


Here we see the patch applies to a specific version of the org.eclipse.equinox.p2.user.ui feature. By relaxing the version range here we can make the patch apply to other versions of the platform. For example, say we knew our bug was fixed on June 11, but there were several version between June 5th and the 10th that still contained the bug. We could instead use a version range like [1.1.0.v20090605-1440,1.1.0.v20090611) (the upper end of the range is open, it includes everything up to but not including v20090611).

Note that the patch Installable Unit also has normal requirements on the feature it is patching. When widening the scope range, the regular requirements should also be widened to match.

Change From / Change To

The 'changes' section of the patch's metadata specifies which plug-in we are patching, and the version to change it to.

In the above example, we are changing the org.eclipse.equinox.p2.touchpoint.eclipse bundle from any version ("0.0.0") to version 1.0.101.v20090611.
We could imagine changing these ranges in the following ways:

Andrew, thanks for the article, it's good to see some information about feature patches!

For anyone else in the dark (I was), the installable unit metadata for the patch ends up inside content.jar/content.xml when you export the patch for deployment. (This metadata is the <unit> XML which needs tweaking if you want to change the version range.)

Thanks for the information. I found that your instructions were not entirely correct. See here:

There was a second place where the feature patch range had to be relaxed.