As an example, I've created my own Eclipse product. It is composed of the Eclipse Platform, CVS support, the CDT and Mylyn. I'm calling it the ADT (Andrew's Development Tools).

It's not hard to create a feature based product that includes these things, and do a product build to end up with something like this: 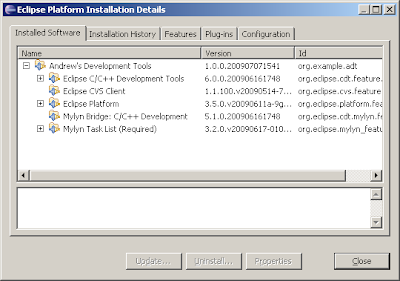 As explained in this newsgroup post, there are two kinds of things that are included in an Eclipse install:
Here in my example, only my development tools "org.example.adt" is installed, the rest (CDT, CVS, Mylyn) are required by my product.

Only things that are explicitly installed will be searched for when you look for updates. Also, the installed things generally specify the versions of things they require, which makes it hard to install/update those required items independently of the root product. In both the newsgroup postings I referred to above, the problem was trying to install/update one of the required items without updating the root product.

So the question becomes how to allow updating sub-components of the product without updating the product itself.

I have created a example builder to do this. Get it from cvs (dev.eclipse.org:/cvsroot/eclipse/pde-build-home/examples/adt.builder).

[Edit 2013/07/03: Eclipse CVS has migrated to git starting in 2010.  The examples are now available under the examples folder in http://git.eclipse.org/gitroot/pde/eclipse.pde.build.git. The example has not been updated to work with git and may require modifications to run properly.]

We need to do two things:

There is a adt.builder/product/adt.product file which we will use to run a product build. If we were to include the features for our sub-components in the .product file, then we would end up with requirements on specific versions of those components. Instead we only include the platform feature [1].

To get requirements to our sub-components, we use a p2.inf file to customize the metadata. We add requirements with entries that look like this:

The .feature.group suffix is the name of the p2 Installable Unit corresponding to the features we are interested in. We specify the version ranges in which we will allow those components to be updated.

The adt.builder project includes a buildADT.xml ant script which will run a headless product build for us. The first thing it does is download zips containing the things we need. This example illustrates three different ways of reconsuming metadata.

In order for our sub-components to be independently updatable, they need to be explicitly installed in our resulting product. By default PDE/Build performs a director install for just the product being built. We can use a customAssembly.xml script to perform additional director[3] calls before the final archive is created.

It looks like this:
We make director calls for each of the sub components we allow to be updated. In the example we do CVS, Mylyn, CDT, and the CDT-Mylyn bridge.

Run the adt.builder by right-clicking on buildADT.xml and choosing Run As -> Ant Build... Be sure to run in the same JRE as the workspace. After running the build, the results are available under adt.builder/buildDirectory/I.<timstamp>.

Running the resulting product, we see that the CDT, Mylyn and CVS are all showing up as installed roots, and are therefore independently updatable. 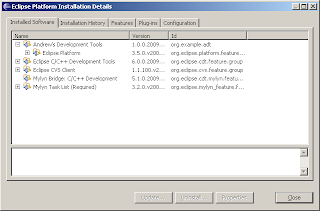 Thanks for the explanations! Your entries always clarify a lot of things. I still do not really see where the packages from EPP fit into. Are they on top of the products, or are they just products, or ...?

The EPP packages are really just products, very similar to this ADT example.

The details are a bit different, they use a feature with requirements intstead of a p2.inf file. I posted another example which is a bit closer to how the EPP packages are built.

I download the ADT example and run the "buildADT.xml" as ant build. It now sitting at "p2.repo2runnable" task with java.net.SocketException:

Staying here for more than an hour.

What is it doing?

Not counting the download time, the entire build takes under 4 minutes for me.

The p2.repo2runnable task is taking bundles from downloads/toTransform/platform.zip and extracting (and unpacking according to the metadata) them into into transformed.

I don't know why httpclient should be getting involved. Internally, the repo2runnable task will be accessing the zip file with urls like jar:file:/platform.zip!/plugins/org.eclipse.osgi_3.5.0.v20090520.jar

So some of your settings don't work anymore and fail silently...